The Mental Capacity (Amendment) Act 2019 received Royal Assent on the 16th May 2019, this legislation will introduce a new model for authorising deprivations of liberty in care replacing DoLs with the Liberty Protection Safeguards. The new law will likely come into force in spring 2020 running alongside the DoLs for the first year.

“The Mental Capacity (Amendment) Act 2019 has now received Royal Assent and become law. The legislation provides for the repeal of the Deprivation of Liberty Safeguards (DoLS) contained in the Mental Capacity Act 2005 (MCA), and their replacement with a new scheme called the Liberty Protection Safeguards (LPS)… The government has not yet announced the date on which the legislation will come into force. But it is possible that this could take place in Spring 2020. The government has confirmed that for up to a year the DoLS system will run alongside the LPS to enable those subject to DoLS to be transferred to LPS in a managed way. 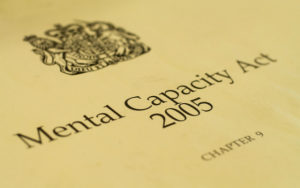 In May 2019, the Mental Capacity (Amendment) Act became law, and one of the major changes to mental capacity law will be the introduction of Liberty Protection Safeguards (LPS). These safeguards will replace Deprivation of Liberty Safeguards (DoLS).

There is currently a Code of Practice being written for the new LPS’s and, until this is finalised and published, training for mental capacity should remain the same and include DoLS.

Tidal Training Ltd have prepared changes and updates to our training, but until the new Code of Practice is released, our Mental Capacity and DOLS Training will remain the same, as directed by Skills for Care.

It is important that your staff are still trained in mental capacity law, as it guides them in their approach to individuals, and how the ability to make choices and decisions should be respected and supported.

The fundamental principles of the Mental Capacity Act 2005 will not change, it is only safeguards that will be updated for those individuals who lack capacity, where decisions may have to made for them in their Best Interests.

We will release a further notification when the training is updated with Liberty Protection Safeguards.

The Government announced on 16th July 2020 that the original implementation date for LPS (1st October 2020) would be postponed until April 2022. Read the full ministerial statement here.

Various Regulations need to be written to accompany the Act. These cover topics such as training for Approved Mental Capacity Professionals, transitional arrangments and who will regulate the LPS scheme.

There will also be a brand new Code of Practice.

There will be a 6 month gap between the final versions of the Code of Practice, and the Regulations, being published, and the implementation of LPS.

You can get information on our Mental Capacity & DOLS training here.

Tidal Training provide onsite face to face healthcare training to large and small organisations across the United Kingdom. Our tutors will travel to your workplace or choice of venue and deliver training at a time and date which fits in with your organisation’s work commitments. If you require training outside of normal working hours we will be more than happy to support you. Our clients do not have to pay for mileage or any other added extras.

Use the form below to contact us today for more information on our courses and to get a free no obligation quote. We'll respond within 2 hours (usually sooner).

Talk to our team of experts for more info and pricing.

Contact us today for all the latest information on our courses and to get a free no obligation quote for all courses delivered at your premises.

“Tidal are a professional and resourceful company that are always willing to listen to their clients. They provide a professional dynamic service, I hope to continue using them in the future.”